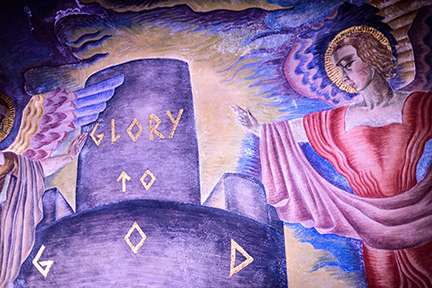 Have you ever wondered why the main part of a church is called a sanctuary? A sanctuary is a place of refuge, a place of safety.

And that is what Trinity Baptist Church has been since its earliest days—a place where people can find a refuge, even in a new country.

Sweden had a “state religion,” and it was not easy for those with other convictions, like Baptist, to worship there. How wonderful it must have been for them to worship freely in America—and in the language of their hearts.

But growth was slow, and at times there were thoughts of disbanding or moving out of Manhattan to Brooklyn. Yet convinced of God’s continued call, these Swedish immigrants persevered.

In 1880, the Lord brought a new pastor and a surge of growth. The church commissioned a missionary to meet all ships arriving from Sweden and welcome the newcomers! Soon they needed to find a larger space.

The congregation kept moving uptown, and in the late 1920s, the opportunity came to build the unique sanctuary where we now worship. Keeping with their strong ethnic identity, they called upon the famed Swedish architect, Martin Gravely Hedmark, to design and oversee the construction of the building.

Even though the worldwide depression was intensifying, the faithful members completed the building with no debt! It was dedicated on January 24, 1931.

Did everything go smoothly after that? Not really. With the depression and then the world war, immigration practically ceased. Swedes who were in New York assimilated. The language and the name of the church would have to change.

And did everything go smoothly after that? Yes—and no. Though the truth of the Gospel is unchanging, New York City seems to be in constant flux.

When Ted and I, with our two toddlers, arrived at Trinity in 1976, we found about 15 people sitting in the pews and 15 people up front in the choir. Not a large crowd, but they were all graciously welcoming. We had felt overwhelmed moving to New York City, but they made the church feel like a sanctuary for us.

In the years since, Trinity has had the ups and downs normal to a community of people who are seeking to grow and better understand what it means to love and serve God in a diverse and changing city like New York. People here can still worship in the language of their hearts, and we can find sanctuary amidst the history of the Swedes — and others — who have gone before us.

The weekend of May 20-21 will be a time to celebrate their legacy and commit to carrying on their convictions.

To find out more about the upcoming celebration and other events, please visit this page: Trinity’s 150th.

Calling all Trinity men (and friends)! Join us for a hearty Saturday breakfast and enjoy…